Life Without Baby is taking a short hiatus. Please enjoy some favorite posts from the last two-and-a-half years. 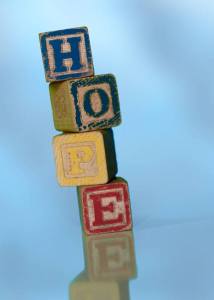 In the past week two different people have made comments to me that have amounted to the same message: Don’t give up hope; there’s still a chance you could have a baby.

Whether you’re childless-by-choice, or by circumstance, I’m willing to bet you’ve had someone say something similar to you.

“It could still happen.”

The “don’t give up hope” type of comment is the one that hits me closest to the core. While I think that hope is key to human survival, I think it can be dangerous if it isn’t backed by action. Just hoping something will happen someday is how potential and lives get frittered away.

While I was trying to get pregnant, I was full of hope, but I was also doing everything I possibly could to make it happen. Now that I am no longer trying, I am no longer holding out hope.

But this doesn’t mean I feel hopeless. And this is what I want to be able to explain to people who still carry hope for me.

Losing hope of having children is very different from accepting and coming-to-terms with the fact that I won’t. I am not hopeless; I haven’t thrown in the towel; I haven’t rolled over and surrendered to my childlessness. I have made a conscious decision to stop my quest to conceive and for the past two years I’ve been working on coming-to-terms with that decision. I haven’t lost hope; I’ve just changed my outcome. I haven’t simply given up on the idea of having children; I’ve made a decision to live childfree.

I know that many of these comments are said with the best of intentions. People who care about us can’t bear to see us not get something we want, or not get something that they think we should want. There is still a pervading idea that people who don’t have children do, or eventually will, want them. But some of us just don’t, or won’t, or did once, but don’t anymore. For the latter group, it’s not about giving up hope; it’s about accepting what is and building a life from there.