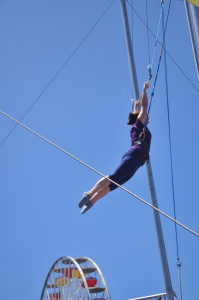 Back in May I wrote a post about my Mother’s Day plans for this year. You may recall that my friend and I had planned to take a trapeze class that day. Well, as it turned out, after battling the Mother’s Day traffic, the class was canceled due to some fierce winds that kicked up that day. Instead, we battled the Mother’s Day foot traffic to find a place to have a lunch with our respective Mr. Fabs.

During the weeks that passed before we could reschedule our class, I had a couple of doctor’s appointments that resulted in some tests. As I’ve mentioned in other posts, I’ve been having some wild hot flashes and night sweats and generally not been feeling 100 percent.

On the day of our rescheduled class, as I was driving to meet my friend for our second attempt, my gynecologist called with my results. I wasn’t surprised to learn that my hormones were all over the place and my numbers put me officially in menopause.

I didn’t have too much time to think about this news as I was scaling a ladder and flinging myself off a high platform with nothing but a string net to catch me, but afterwards it all started to sink in. On the day I took my class, originally intended to take back Mother’s Day, I learned that any chance I might have had (slim as it was) to become pregnant and give birth to a child, was gone. The irony was not lost on me.

So, as Porky Pig would say, “Th-th-th-that’s all folks !” I am now officially done. And after a small wave of sadness, I’m okay with this. I’ve done my hard work in healing from my loss and I have my life moving in a direction I like. I don’t have to worry about how I’d feel about a surprise pregnancy (you know, like the ones people tell you happen “all the time.”) Somehow, there’s a finality to it all and it’s an end I think I was ready for.

Now I can get on with the business of doing things unbecoming for a woman of my age. I’m very much looking forward to that!

You can see my trapeze efforts in this video. I almost made the catch. And don’t be alarmed by the gasp from the crowd. I didn’t get hurt (apart from a few bruises and some muscle soreness the likes of which I have never experienced before!)