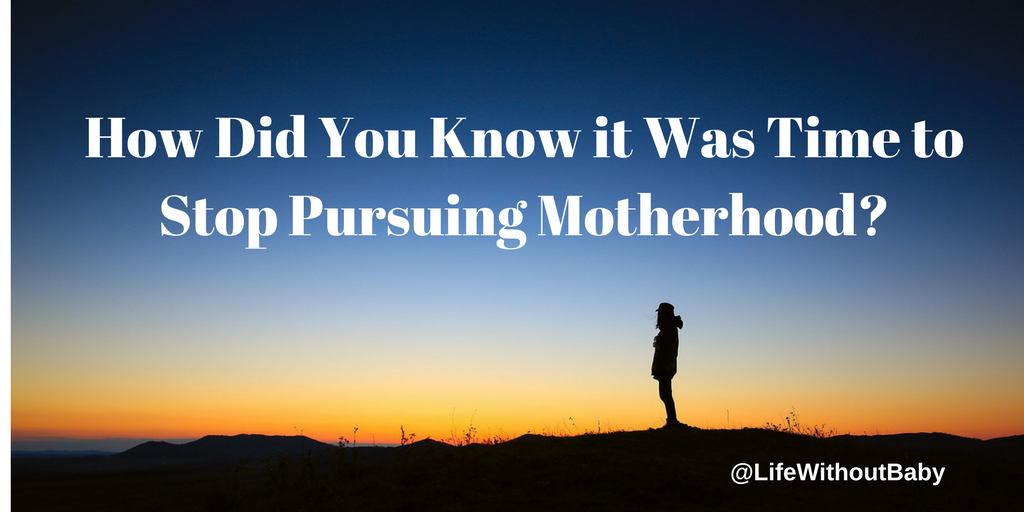 Last year I had the pleasure of doing a podcast interview with Cathy at Slow Swimmers and Fried Eggs. We had an excellent conversation and covered the gamut of topics from the shock of realizing we were infertile to the unexpected benefits of living childfree. One of the questions she asked about my “lightbulb” moment, that one event or conversation or realization that told me I had to stop pursuing my quest for motherhood.

There were several moments that I wrote about in detail in I’m Taking My Eggs and Going Home. These were moments when I knew, deep down, that I had to stop treatment and had to find a way to move on without children.

The first was when I was sitting at a bus stop on my way home from my third doctor appointment of the week. I realized that getting pregnant had become a full-time job and that it was consuming every aspect of my life. Case in point, I don’t even remember why I was taking the bus (two buses, actually) to my appointments, but I do remember that this had become my habit. I can picture myself now, staring out the bus window, almost in a trance, so wrapped up my world of infertility, I was barely aware of my actions. I knew then I had lost touch with reality and myself.

Another point came not long after Mr. Fab realized that adoption wasn’t going to be a viable option for us. This really should have been the stopping point, but before long I found myself in the infertility section of the bookstore, browsing a book by a doctor who had performed fertility miracles through Chinese Medicine. I bought the book, even though we’d already traveled far down that road. When I mentioned it to Mr. Fab, he said all the right, supportive things, but I saw his face drop for a moment. I knew that he was wrung out, that he had reached the end of his journey, and that I should have been at the end of mine, too. But by the end of that week, I had an appointment with the miracle doctor and I was back on the bus, both literally and figuratively.

One of my last lightbulb moments came when Mr. Fab’s first grandchild was born. That passing of the motherhood torch to the next generation served to tell me that it was time for my journey to end. I had done all I could, motherhood wasn’t going to happen for me, and I had to let it go.

In between these events, and even after I was sure I would not be a mother, there were many moments of doubt, of second-guessing, of what-ifs. But for every step backwards, I took two steps forward toward recovery, and then three, and then four, until the backward slips became fewer and eventually stopped.

I imagine each of you has a similar story of realization and doubts. What were your “lightbulb” moments and how did you finally know it was time to stop?

You can list to my interview with Cathy here.