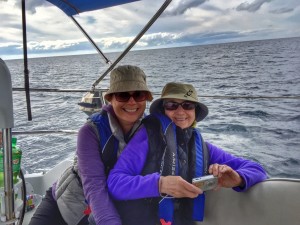 Mum and I on the water

Next Sunday is Mother’s Day in the UK, which, let’s face it, is about the worst day of the year to be childless. I think the UK is still catching up with the States as far as turning this quiet, “honoring of one’s mother” into an all-out Hallmark bonanza, but given the recent surge in popularity of Halloween and Black Friday sales, Mother’s Day is unlikely to escape.

As I live on the opposite side of the world from my own mother, I can usually escape the Mother’s day madness that happens here in the US. I’ve sent a card and gift and I’ll make a phone call, and my mum will be appreciative of the gesture. She doesn’t want or need any more fuss than that. But come May, I know that many of you here in the US will be facing far bigger expectations, so let’s take a breath before the madness begins and start with a little history and perspective.

The modern idea of Mother’s Day here in the U.S was started in 1905 when Anna Jarvis, a woman who wanted to honor her own mother and her contributions to Anna’s life, fought to make it an official celebration. Mother’s Day as we know it was made official in 1914, when President Woodrow Wilson designated it as a national holiday celebrating mothers. It was quickly adopted and subsequently commercialized.

Anna (who was not a mother herself, by the way) never intended the day to be a celebration of motherhood, but a way for people to honor their own mothers in their own way. She was so enraged by the twisting of the quiet commemoration she’d envisioned that she actively protested the holiday that she’d fought so hard to create. I think poor old Anna would turn in her grave if she saw what Mother’s Day has become.

Keeping some perspective on the original intention can help you get through this difficult day, especially if your own mother is still in your life. You’ll need to find a way to celebrate her that’s appropriate for your relationship and your own need for protection. Perhaps you can send her a card or flowers. If you like to take her to lunch, suggest doing it the week before or after Mother’s Day, when it won’t be so crowded and you can enjoy your time together. Use this as an opportunity, if you can, to create a more meaningful tradition with your mother. This isn’t about poo-pooing Mother’s Day and all mothers, including your own, but it is about protecting yourself and honoring your mother in a meaningful, rather than a wholly commercial and meaningless, way.