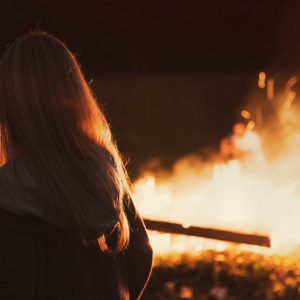 Since we humans first began gathering into social and familial groups, we’ve used stories to create a sense of community. Early hunter-gatherers shared tales to pass along information, traditions, and important lessons.

In this fascinating Life Science article, Campfire Tales Served as Early Human Social Media, researchers noticed a big difference between daytime and nighttime campfire stories told among a tribe of Kalahari Bushmen. While the daytime conversations were made up of only 6 percent stories, the rest being complaints, gossip, hunting plans, and jokes, once the tribe gathered around the nighttime campfires, 81 percent of conversations were stories.

The stories passed along information about tribal customs and ceremonies, as well as warnings of dangers, such as the story of three bushmen killed in a fire. The tribe also used stories to pass information to younger generations.

Even today, we find our way around in the world and understand who we are through handed down stories. I heard stories about my aunt who emigrated to Australia by boat in the 1940s, which helped me understand why I seemed to be the only person in my family to move far from home. I recently learned that my habit of dragging my husband on long, under-prepared hikes comes not from my dad, as I’d always believed, but from my mum, who had the same habit.

As a child, I learned about the dangers of electrocution, of hot cooking oil, of crossing the street, not from formal lessons, but from stories told by others. More recently, my social media feed has bombarded me with a million things to worry about, everything from terrorist attacks to falling off a cliff while playing Pokémon Go.

From this community, I’ve learned from other people’s stories that I was not alone in my experiences, and gained ideas about how to cope with challenges. And writing my own story has helped me to understand myself too, to give perspective to experiences I didn’t fully understand as they we happening.

As you think about the stories you might tell, what important wisdom would you pass along if you had the chance to sit around the campfire with your younger self?