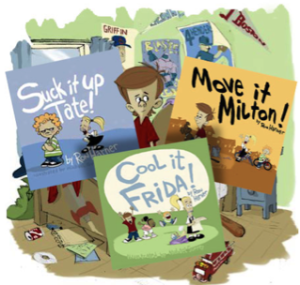 My nephews love Suck It Up, Tate!, one of three books for kids by Ron Harner. It is one of those books they beg me to read to them “Again! Again!” Clearly, Ron “gets” kids, so it may come as a surprise that he doesn’t have any of his own.

How many times have we heard “You wouldn’t understand, you’re not a parent” and felt our blood boil? The next time some unfeeling person slings this at you, remind them that Theodor Seuss Geisel, aka Dr. Seuss, didn’t have children of his own. Then tell them about Ron Harner. His story is below.

By the way, when Geisel was asked about not having kids, he responded, “You have ’em, I’ll entertain ’em!” Sounds like Ron is doing a bang-up job of this as well.

LWB: Are you childfree by choice, chance, or circumstance?

Ron: Most definitely by chance. I was on track to be a father, and then my first marriage blew up unexpectedly and pretty spectacularly. I was reeling for a while. Having kids was the plan, but life doesn’t always stick to the plan.

Ron: Not having children is something I made peace with a while ago. That’s not to say I don’t get twinges occasionally, but, after my breakup, I didn’t go looking for a mother. I didn’t go looking for anybody. I met a girl in an elevator one day, and everything changed for the better. Kids weren’t in the cards for us. That was twelve years ago. I’m glad I didn’t take the stairs that day.

LWB: What was your inspiration for the first book/series?

Ron: I’m the youngest of five children. My brother and sisters all have a bunch of kids. One Thanksgiving, we were sitting around the table and my oldest sister said, “You write everything else, why don’t you write a children’s book?” And then she added, “…but not one that’s all sunshine and lollipops. I’d love to find a book in which the kid screws up and has to deal with it.”

So, I wrote one. It’s called Suck It Up, Tate! I’m fortunate to count a ridiculously talented Disney animator [Michael Surrey] among my friends, so I enlisted him to make it look great. I was able to publish that one, and then was asked to write two more.

LWB: Are readers surprised to learn you don’t have children?

Ron: Readers do seem surprised to discover I don’t have kids. But, like I mentioned, I have a brood of nieces and nephews who I adore. I spend as much time with them as I can, and they supply me with a ton of material.

I should note that I have a dog, Maggie, who I need as much as she needs me. People see the way I act with her, and that’s when I get the “How is it that you don’t have children?” question the most.

LWB: How gratifying is it to hear “My kid wants me to read it to him every night!”? Do you feel like you are making a difference in a kid’s life through your stories?

Ron: My aim was to write books that would appeal to kids and adults. The messages in these books are lessons my father gave me when I was young—not verbally; Dad wasn’t a big lecturer. He led by example. I took what stuck with me, added funny characters, and the stories just poured out.

I have to say it’s incredibly gratifying when I get a note from a parent who tells me one of the books has struck a chord with their child or that he or she shouts out the title at the right point of the story. Books played a big part of my life growing up, so that makes me smile.

LWB: What’s the hardest part for you about not having children?

Ron: Most times I’m fine. There are times when I’d love to be able to be share some of the things I’m passionate about with someone just coming up in the world. I play my favorite records for my dog, but she seems underwhelmed.

LWB: What’s the best part about not having children?

Ron: I’m able to spend real quality time with my wife, doing the things we love to do together. Until just recently, when we got hitched, we were not tied together by anything other than the fact that we love being with each other. Plus, I can indulge all the creative stuff I like to do, including writing and performing sketch comedy with a great group of comedians I met at The Second City. That stuff is pretty liberating.

LWB: What’s the best advice you’d offer someone else like you?

Ron: The only advice I’d dare give anyone is to be truly honest with yourself. I’m insanely happy with my lot in life. Don’t do something just because someone expects you to, and don’t turn away from something that drives you just because it’s difficult.

Ron: Kids frequently ask me if I’m going to write a fourth book—they’ve even gone so far as to suggest new stories! Maybe I’ll reread the first three books after this interview. Who knows where the next good idea will come from?

Suck It Up, Tate!, Cool It, Frida!, and Move It, Milton! are available in hardcover and paperback at RonHarnerBooks.com. Paperbacks are available at Amazon and BarnesandNoble.com.

According to an ad for Advantage®II, a mama flea can lay 2,000 eggs during her lifetime.

I realize that statistic is meant to scare me into buying their flea-killing product for my pets, but all I can think is, “That is so friggin’ unfair!”

It’s two o’clock on a Saturday morning. I am sitting at my computer at this ungodly hour because one of our dogs has a new habit of barking at the moon around midnight, and the other dog, who recently injured a leg, started noisily gnawing at the bandage around two. I was able to go back to sleep after the first dog-interruption, but after the second, my brain kicked into gear. After an hour of lying in bed thinking about bills that need to be paid and work I should have finished yesterday and my to do list for the weekend and why I love the movie The Help so much (Viola Davis—she’s amazing), I decided to get up and get something done…like beat my time for finishing a Sudoku puzzle.

In college, I was a habitual all-nighter. Every paper I wrote was completed while I watched the sun rise, then I’d throw on a baseball cap and dash across campus to get it into the TA’s mailbox before the morning deadline, and I still looked and felt as fresh as a daisy. But I’ve lost the skill over the years. I now drag myself to bed around ten, get up at five to fit in gym time, get to my desk by nine at the latest, work long days, and repeat. I nap on the weekends. Sometimes I nap during my lunch breaks.

I don’t know how parents do the sleep-deprivation routine on an ongoing basis, the first six months spent meeting the constant needs of a newborn, then the next eighteen years getting up for nightmares, water requests, barf sessions, and missed curfews. Maybe if I’d become a mom in my twenties I could have pulled it off. But now, I love my sleep time. I need my beauty rest. I want to get a full eight hours with a full dose of REM! I think of it now as a luxury that I get to enjoy because I am childfree, and I am grateful for it. Especially when I am denied the benefits on long nights like tonight.

Kathleen Guthrie is a Northern California–based freelance writer. Her fastest Sudoku-solving time is 3:16.