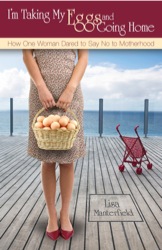 This week marks the six-year anniversary of the publication of my first book, I’m Taking My Eggs and Going Home: How One Woman Dared to Say No to Motherhood. Aside from being stunned at how quickly six years have passed, I’m also struck by how intertwined my writing and life have become.

I never set out to write a book about being unable to have children; my plan had always been to write fiction. But as is often the way, my personal infertility story began creeping into writing exercises as I struggled to put my experience into words and be heard. Then, in a weekend writing workshop, our very astute teacher, Amy, asked the question, “What’s the thing you don’t want to write about?” Our assignment was to write down our answers before going to bed that night. I wrote down that I didn’t want to write about my infertility. I expected there would be a follow up assignment the next morning, but Amy never mentioned it again.

Time passed as this idea of writing my story began to worm its way into my brain and suddenly I realized I’d written several chapters about the thing I swore I didn’t want to write about. The next thing I knew I was committing to writing a book.

The trouble was, my story didn’t have an ending yet. Mr. Fab and I were still working through fertility treatments and adoption, and I was far from ready to give up. The ending of my book would obviously be the scene where I learn that I am pregnant and we laugh joyously at all we’ve been through. So I kept writing until that ending came.

During this process of creating a book, I began to look at my story through an editor’s eyes and it gave me some distance from my experience. I began to gain perspective about my own crazy journey and at some point, I realized what the ending of the book—and the ending of my story—had to be. It had to be the point that Mr. Fab and I decide to let go of our plans to have a baby and take our lives in a new direction. That’s what we did and the rest, as they say is history. I rewrote the book entirely, with this new ending in mind and then I went off to figure out how the heck I was ever going to stop crying about this cruel blow I’d been dealt.

I started this blog to promote the book. I created a website and began writing my way through the mess of trying to come to terms with my decision. I felt like a very unwilling pioneer, like I was the only person in the world talking about this awful situation. But then readers began to find the blog and I learned that I was far from alone. I found other bloggers sharing their stories and, bit-by-bit, I began to heal. I stopped crying and started being angry instead. And after a while I stopped being so angry and started being…happy! Happily childless! I could never have imagined it.

So, last year I began collecting everything I’d learned since that moment of realization that I wouldn’t be a mother. I’ll admit that I gained most of this knowledge in hindsight after struggling through the mess of emotions and then realizing how I could have done it better. I also learned so much from you, dear, dear readers, sharing your experiences and hard-won lessons. I put everything I learned together in a series of e-books and next year I’ll put them out as a complete book. And once again, as I read through the words I wrote, I’m learning more about myself. Life, art, and infertility inextricably intertwined.

So here I am standing in this odd place, not at the end of my journey (because I don’t think this will be a journey with a finite ending) but at a place so far distant from where I began that I can barely recognize myself anymore.

And the good news I have to report from this strange land is that I’m okay. I didn’t get the thing I once wanted more than anything in the world, but actually, life is pretty great. That’s an ending to the story I would never have predicted.

To celebrate this pretty special week, I’m offering free copies of Workbook 1: Letting Go of the Dream of Motherhood. You can get your free download today and tomorrow only (November 16 and 17) from Amazon. It’s available for all devices (Kindle, iPad, Kobo, etc.) or you can download a free e-reader here to read the book on your computer.